Applying for the 2019 Clinical Excellence Awards

You are here:
News 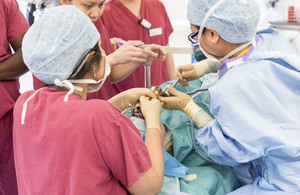 The 2019 Clinical Excellence Awards round will open on Thursday 7 February and close at 5pm on Thursday 4 April.

ACCEA guidance is expected to be made available on their website in line with the opening date –https://www.gov.uk/government/organisations/advisory-committee-on-clinical-excellence-awards

At this stage, we will accept application on the forms used previously – https://www.gov.uk/government/publications/clinical-excellence-awards-2014-application-forms – any changes are expected to be minimal.

Consultants will need to put in a renewal application if:

In some cases, consultants will be renewing out of the usual cycle. Awards are reviewed earlier if there is a change in job or a significant change in job plan.

If you would like to apply for ALSGBI support for a Bronze, Silver or Gold Award please ensure that your completed application forms are sent via email to Jenny Treglohan (jtreglohan@alsgbi.org) by 9am on  Friday 8 March 2019 at the very latest.

As a rule, candidates for Bronze (Level 9) should have a minimum of at least five local Clinical Excellence Awards, and those applying for Silver (Level 10) and Gold (Level 11) should have held their current awards (Bronze for Silver applicants, Silver for Gold applicants) for a minimum of four years to have a realistic chance of success. Furthermore ACCEA (and therefore ALSGBI) will only consider those achievements made since the last award for Silver, Gold applicants.

Can we also remind you that the responsibility for submitting your application appropriately and on time to ACCEA rests entirely with you, the applicant.

If you are successful in receiving ALSGBI support then ALSGBI will be responsible for submitting your citation of support.  However we would expect you to submit your application to ACCEA at least 7 days before the ACCEA stated closing date to enable the ALSGBI office to upload the ALSGBI citation onto your application on the ACCEA website.

Could we also suggest that you seek similar support from all other ACCEA registered nominating national associations/societies at which you are a member?

The National Hiatal Surgery Register is now FREE for ALSGBI Members to use
June 12, 2022